I hate this holiday.

Well, perhaps “hate” is a little strong. Leastways, I dread it immensely and am much happier when it’s over. Then I can go back to the normal amount of times I get the “Do you have kids?/Are you a mom?” question, which is already enough times, believe me.

It’s a normal, innocent question, but one that’s impossible for me to answer both truthfully and succinctly. I can’t really say “yes,” because there are no children in my household that do not have fur or feathers or leaves. But to say “no” means to leave out so much and sometimes feels like denying a part of my life ever happened, so that I still feel like I’m lying.

So much of my brain is preoccupied with fending off impostor syndrome. Everything I do, every title I hold, seems to require a modifier. I’m a writer, but I’ve only been published once, just a little article in a little magazine, and I still have a day job, so I still squirm when I list it as my occupation. My day job is substitute teaching, and often I get asked whether I ever want to become a “real” teacher (as if picking up common core math on the fly and turning around and instructing 20-some kids in it doesn’t count). I also love to garden, I’m even secretary of my local garden club, but I have such an inconsistent yield–my blueberry bush currently sports only about a dozen leaves on a single living branch–that it’s really just a hobby.

Yet, knowing I dabble, people turn to me for advice. I’ll gladly tell you what I know or have heard, but I make no guarantees on results. I can I only say what I do, and I could very well be doing it all wrong. Judging solely by the outcomes, it looks pretty likely that I am.

My tomatoes, which I started from seed at the very beginning of February, are skimpy and stunted, still under a foot tall, whereas the other week I planted some for a church’s garden that were closer to two feet and were a tangle of lush branches. Tomatoes are just about the easiest vegetable to grow, yet somehow I’m screwing them up. My peas are trailing wildly up their trellis but have yet to flower, and with temperatures hitting the 90s this week I’m afraid they won’t do so in time to have a harvest.

And me? I’m about to hit the middle of my 30s and begin the downhill slide into my 40s, with little to show for my years. No career, no novel, no kids. Just two pairs of hospital socks.

My first pregnancy was a dud, but it took my body entirely too long to acknowledge that, so I required medical intervention to make it accept the fact that, despite what it thought and despite all the months of effort and suffering, it just wasn’t happening. So, I had a D&C. The doctors wiped the slate clean, and I left the hospital with a pair of socks with paw-shaped traction patches.

My second pregnancy was different, and yet the outcome was the same. I made it to the halfway point, through all the body aches and the all-day nausea, only to hit 21 weeks and go into labor spontaneously. Nothing they could do to stop it, so I gave birth and left yet another hospital with yet another pair of socks.

Now I have two pregnancy stories and one labor and delivery story, but still no kids. One foot in mom world, one foot outside it. It’s been over two years since my last pregnancy ended, and I still don’t know how to answer some questions. The first loss is somewhat simpler to explain, as I can call it a “miscarriage” and that almost covers it. The second is much more difficult, as we do not have a label for that kind of loss. I’ve trimmed my statement over the years, so that now it’s down to “I lost my son to pre-term labor,” but even that is wordier than I want it to be, while still leaving out so much.

And when moms start swapping pregnancy stories, often I judge it best to stay out, just to avoid confusion and more awkward questions than I care to field. If I have to get into details, my answers, even plainly and calmly stated, can evoke pity, which I try to avoid, and tend to bring down the mood of the conversation. I feel like I’m riddled with conversational pitfalls that people can unwittingly fall into and that I cannot warn them of. But sometimes I just want to say his name.

Most people are incredibly sensitive about it. My amazing friends and family make sure to include me in Mother’s Day celebrations. Sure, I feel like a lone black cloud in a big blue sky at those things, but it’s marginally better than being a black cloud at home, alone. And I get cards and flowers and gifts, which are heartfelt acknowledgements of my membership to Club Mom, but there’s no way to dodge the feeling that I’m a fraud, an interloper, a charity case. Yet I don’t belong in Club Non-Mom any more than I do in Club Mom.

But my own club is so much smaller and sadder. It’s an uncommon thing that I went through–or so the OBG reassures me when I tell her I’m afraid of it happening again–and that brings a lonely feeling of isolation. No one wants to feel they’re the only one among their peers ever to have endured such horrors. Nor would I wish them on anyone just for the sake of having someone to talk to on my lonely island. I have friends on the nearby island of Miscarriage that I can clumsily sign with, and that’s something, truly. But many of them have made it across the ocean to the big island of Real Mom, for which I’m immensely happy. Even if it means the divide between us had to grow, I wouldn’t take that away from them for anything.

And there are others on my island, only I find many of them just as hard to connect to, because I do not burn with longing for a child the way they do. My heart breaks for them, as I know their hurt is worse than mine. I’m spared their pain, but that only serves to increase my sense of isolation. I want kids, but I have never had the drive for them that other women have felt since they were small. I rarely played with baby dolls; I played with Barbie until 7th grade, but baby dolls just didn’t hold my interest. So, really, I’ve been on my own island for longer than I initially thought.

Somehow, though, when I gave birth, my mindset shifted. Right as my first real chance at motherhood was slipping through my hands, I suddenly wanted what I was losing. Blame it on oxytocin, or one of the slew of hormones that take over when you deliver, but in an instant I went from indifferent to desirous. I still don’t feel my life will be bereft without them, but I will nonetheless be much disappointed if I don’t manage to create a little someone who is part-me and part-Ryan.

I haven’t made it to the main isle. I’m still building my raft, planning my route, waiting for the tide to change. And I may make my attempt only to get pushed back onto shore again and again. But that won’t stop me from trying, hoping for the day I catch sight of the rainbow that signals the end of the rain.

You know, perhaps we do a disservice by thinking of titles as single destinations instead of a general area that covers a wide span. I am no master gardener, but if I have raised beds in which I plant things and water them and do my almighty best to protect them from bad weather and pests, and if I pull weeds and occasionally bring in a modest harvest, can I not say I’m a gardener of some kind? And if I write but only have one byline and a half-finished novel along with a pile of unsold essays and undeveloped ideas, can I not say I’m some kind of writer? Maybe we’re too exacting, we demand too much in exchange for a full-fledged title. After all, one can be technically a mother and yet not be very “motherly,” yet no one kicks her off the island, so why cannot a motherly person be a mom of sorts?

I know a lot of people see this as a kind of watering-down–the idea that if everyone is special no one is special. I myself take my hat off to “real” moms who are in the trenches: wiping the noses, tying the shoes, and shuttling from school to practice to home, just to skim the surface of what they go through. But to say this holiday is only for them is rather like saying Veterans Day is only for those who saw combat or died in battle. We hold those highest, certainly, because their sacrifice was greatest, but that doesn’t mean the soldier at the desk didn’t serve. It is just as possible to be too exclusive as it is to be too inclusive.

The best thing I can say about today is that it’s the one time of year the waters recede enough to make it possible to walk to the big island, and all my friends over there wave to me to come join them for the day (indeed, from them I have a standing invitation to come whenever I feel like it). They insist to all the other natives that I belong there and that if anyone wants to check my invitation, they are welcome to look in my sock drawer. They ask their fellow natives to scoot down a bit and make room for my chair at the table. In exchange, I try to be as unobtrusive as possible. I leave the biggest piece of chicken for the natives, and try to be as small and light-colored a cloud as I can be. You’re welcome to talk to me: I’m not catching, and I rarely cry in public. You can even ask me about IT, or, better yet, ask me his name.

In short, it isn’t the happiest day of my life, but I’m grateful to feel so welcome, so held.

This isn’t a rant against greeting card companies or moms, and it certainly isn’t a call for a pity party. Trust me, the last thing I like to do is draw unnecessary attention to my island; most of the time I don’t even tell people I live here. Just think of this post as a smoke signal I sent up, inviting the others on my lonely island to join me in my corner of it, in case you didn’t know I was here. You may be lonely, but you’re not alone. And the ladies on “Real” Mom sent me back with some refreshments to encourage you to come visit sometime. They are playing their music loudly enough that you can cry if you want–some of them may be crying today, too. Or you can listen quietly or even sing along. No one will judge you. We’re all one big island today. 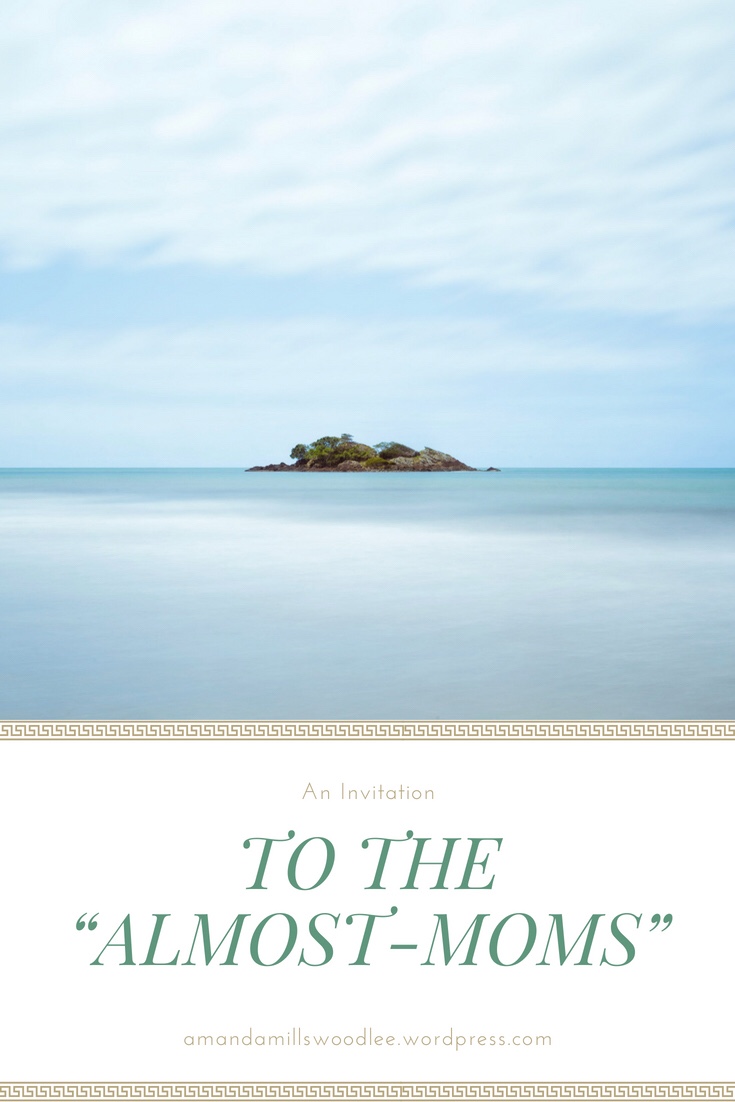 Drop me a line if you feel like it. Good or bad, I wanna hear it all. I mean, try to be nice if it's bad because I have to be nice, too. You guys are the reason I'm here after all.
Loading Comments...
%d bloggers like this: